Xeroderma pigmentosum (XP)is a rare inherited skin disorder characterized by a heightened sensitivity to the DNA damaging effects of ultraviolet radiation (UV). The main source of UV is the sun. The symptoms of XP can be seen in any sun-exposed area of the body. The effects are greatest on the skin, the eyelids and the surface of the eyes but the tip of the tongue may also be damaged. In addition, approximately 25% of XP patients also develop abnormalities of the nervous system manifesting as progressive neuro-degeneration with hearing loss. People with XP have a 10,000-fold increased risk for developing skin cancer including basal cell carcinoma, squamous cell carcinoma and melanoma. They also have a 2000-fold increased risk for cancer of the eye and surrounding ocular tissues. These symptoms appear early in life, typically before age 10 years. This case is being presented to highlight the rarity of a case of xeroderma pigmentosum with squamous cell carcinoma in a ten year old child.

Xeroderma pigmentosum (XP) was first described in 1874 by Hebra and Kaposi. In 1882, Kaposi coined the term xeroderma pigmentosum for the condition, referring to the characteristic dry, pigmented skin seen in these patients [1,2]. XP is a genodermatosis characterized by photosensitivity, cutaneous pigmentary changes, premature skin aging and the development of cutaneous and internal malignancies at an early age. These patients exhibit enhanced sensitivity to ionizing radiation [1,3,4].

A ten year old child born of a second degree consanguinity Presented to the Dermatology OPD at MVJMC & RH with Complaints of. Difficulty in opening eyes to broad day light since six months of age. Multiple dark and pale coloured discolouration present all over the body predominantly over sun exposed area. Swelling arising from the right eye since four months, associated with redness and watery discharge from both the eyes.

Patient was apparently normal at birth later cried excessively on bring out to the sun since six months of age. Patient would also refuse to open her eyes as a child to broad day light since six months of age. Patient also complaints of multiple dark and pale coloured discolouratioin associated with scales being present diffusely. Predominantly over the sun exposed area first starting over the face. Complaints of a swelling arising from the right lower eyelid since four months, which was insidious in onset initially of the size of a pea, which gradually progressed over a duration of three months to attain the present size of approximately 2×3 cm.

No H/o of application of native medicine. No H/o trauma to the eye. No H/o of known allergy to food, drug.

The Patient is a second child born to second degree consanguineous marriage.

Received as per schedule.

A moderately built and moderately nourished child who is consious and co-operative, Well oriented to time place and person. 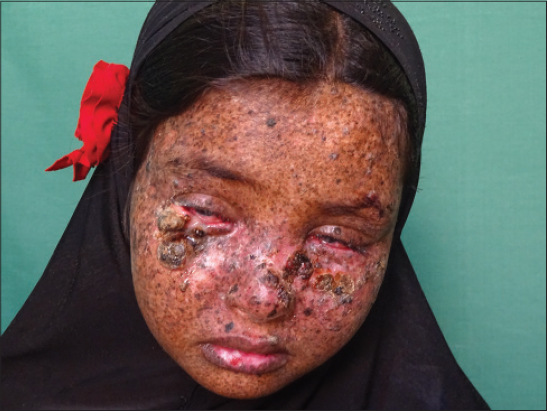 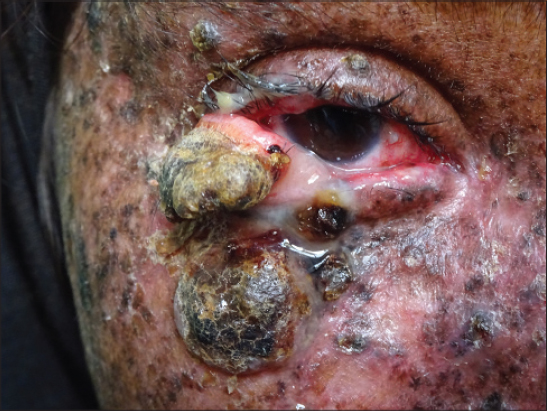 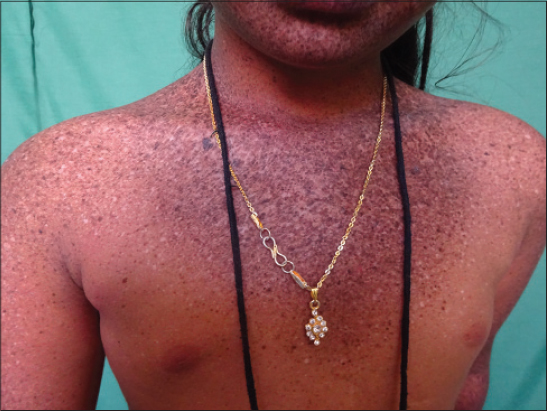 With this we arrived a provisional diagnosis of xeroderma pigmentosus with squamous cell carcinoma. 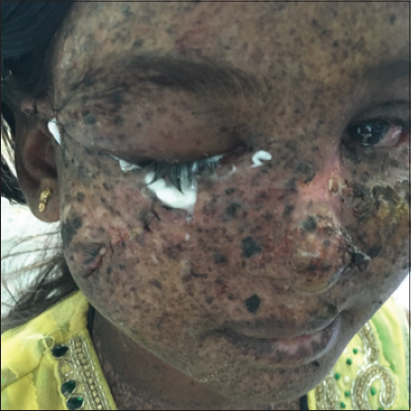 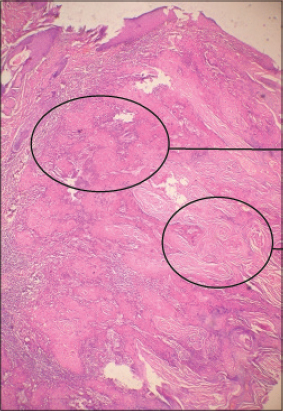 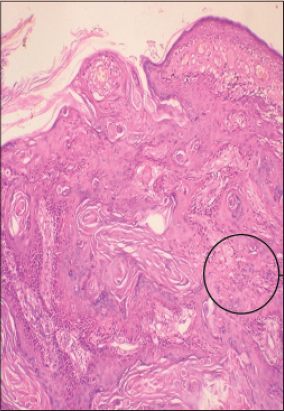 Thus the final diagnosis of xeroderma pigmentosus with squamous cell carcinoma was made.

XP is inherited as an autosomal recessive trait. It is a rare pigmentary atrophic disease that begins in childhood and progresses to early development of senile changes in sun-exposed skin [5]. Parental consanguinity is common. XP occurs with an estimated frequency of 1:250000 in the US and, according to Robbins et al., is more common in Japan. The incidence in the Indian population is insignificant. XP shows no sex preference [1,3,6].

The basic defect in XP is in Nucleotide excision repair, leading to deficient repair of DNA damaged by UV radiation. NER involves removal and the replacement of damaged DNA with new DNA. Two types of NER exist: global genome NER (GG-NER)and transcription-coupled NER (TC-NER). In addition to defects in the NER genes the immunosuppressive effects of UV-B radiation may also be involved in the pathogenesis of XP.

XP patients below 20 years of age have a >1000-fold increased risk of developing skin cancer [6,7]. The median age of onset of non-melanoma skin cancers reported in patients with XP is 8 years, compared to 60 years in the healthy population. Variations in the type of malignancies in XP appear to be related to the degree of sun exposure and genetic heterogeneity [8]. The two most common types of cancer found in XP patients are BCC and SCC, mainly occurring on the face, head, and neck. Melanomas occur in one-fourth of cases, and one-third of these occur in the head and neck [4]. Early detection of these malignancies is necessary because they are fast growing, metastasize early and lead to death. Two important causes of mortality are metastatic melanoma and SCC.

Most patients with XP do not live beyond the third decade because of the development of tumors [4]. Cutaneous neoplasms in XP patients cannot be prevented but early protection from UV radiation should be advised. Premalignant skin lesions may be treated with cryosurgery or topical antimitotic agents. Early removal of neoplasms should be accomplished with excision, chemosurgery or intralesional IFN-a. In selected XP patients, oral isoretinoin has been shown to significantly reduce the incidence of skin cancers [9].

A recent clinical trial by Yarosh et al. [10] found that the enzyme T4 endonuclease V, applied regularly as a topical agent, significantly reduced the onset of both BCC and actinic keratoses, thus giving a little hope to XP patients, who suffer from much psychological trauma and face many socioeconomic problems. Although, early detection and treatment of cutaneous malignancies will reduce morbidity and mortality, genetic counseling remains the most important measure for preventing XP.

This case is being presented to highlight the rarity of a case of xeroderma pigmentosum with squamous cell carcinoma in a ten year old child. And need for early diagnosis and prompt treatment.