Introduction: Melanoma has become a public health problem; however, with proper education and the use of sun safety techniques, most cases can be prevented. The purpose of this study is to determine if medical students have safer sun practices than the general population.

Material and Methods: An online survey was sent to all students enrolled in the three medical schools in the Kansas City metropolitan area. Surveys were sent to 1200 medical students with a 39.25% response rate (n=471).

Results: Most of the student population (n=436; 92.6%) indicated that over the past year they had used one or more forms of sun protection. Of the respondents, 60.7% (n=286) indicated they had, to this point in their medical training, been educated counseling patients about the risk factors for prevention of skin cancer. Respondents who indicated that they had been educated on the steps/procedures of a complete skin exam were significantly more likely to indicate they had used sun protective equipment in the past year (P=.024).

Patients with nonmelanoma and melanoma skin cancers often initially present to a non-dermatologist, suggesting that more physicians need to have the clinical skills to diagnose worrisome lesions and counsel on proper sun protective practices [4–6]. Physicians with better personal health practices are more likely to have better attitudes towards counseling patients, counsel a broader range of patients and counsel more frequently [7]. We investigated the level of education and personal practices of medical students regarding skin examinations and sun protection habits.

A detailed medical literature review was initially performed looking at the habits and experiences of the general public in relation to sun exposure and indoor tanning bed use, as well as the research available on medical student training with safe skin practices and skin examination. From this literature evaluation we developed a survey that had two primary sections and included a total of 22 questions. These questions assessed the skin characteristics of each student as well as their personal sun practices.

The survey was distributed via school-specific email accounts in the fall semester of 2012 to all medical students, MS1 to MS4, (n= 1200) from the following medical schools: University of Kansas School of Medicine, University of Missouri-Kansas City School of Medicine, and Kansas City University of Medicine and Biosciences. Study data was collected and managed using the Research Electronic Data Capture (REDCap) (Vanderbilt University, Copyright 2016) electronic data capture tool hosted at the University of Missouri-Kansas City. REDCap is a secure, web-based application designed to support data capture for research studies. The respective Institutional Review Boards at each of the participating medical schools approved this study.

Survey responses were reviewed for completeness. Surveys submitted without responses were removed and not included in the final study population or descriptive statistics (n=2). Descriptive statistics were generated for all survey items and an initial univariate analysis was performed on each item through use of the chi-square test. Correlations were also performed to evaluate direction and magnitude of any significant associations found between survey items. Sequential and systematic stratified univariate and multivariate logistic and multinomial regression analyses, as appropriate, were conducted to assess for significance, confounding and effect modification on selected items utilized as outcome variables. All variables found to be statistically significant or to be associated with confounding/interaction were utilized in the final regression models. Odds ratios (OR) and 95% confidence intervals (CI) were determined from regression modeling and all tests for significance were two-tailed with an a priori level of 0.05 (P=.05). Stata statistical software package (SE version 9.2; Stata Corp., College Station, Texas) was utilized for all analyses.

An estimated total of 1200 medical students were surveyed and resulted with a 39.25% response rate (n=471). Most of the student population (n=436; 92.6%) indicated that over the past year they had used one or more forms of sun protection. Only 10.4% (n=49) of the respondents indicated they had used a tanning bed during the past year (Table 1). 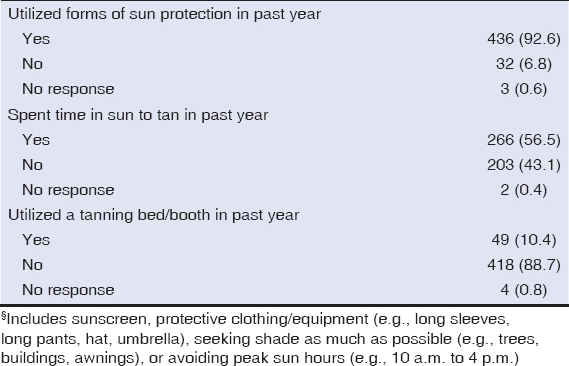 Medical student respondents who indicated they had been educated on how to counsel patients on the risk factors and prevention of skin cancer were significantly more likely to indicate they seek shade as much as possible (P=.049), avoid peak sun hours (P=.010), believe that their medical education had changed their beliefs about tanned skin, and would be more likely to perform a complete skin exam on their future patients (P=.001). These students were also less likely to use a tanning booth in the past year (P=.003) (Table 3).

Table 3: Comparing medical students who were educated versus those who were not on the behaviors above 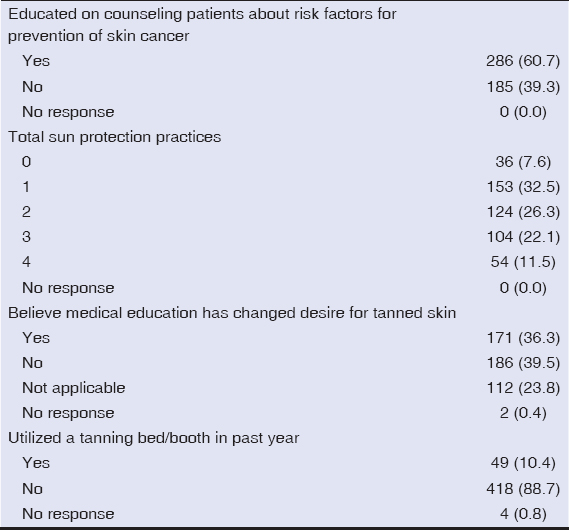 Adult medical students (92.6%) are more likely to use one or more forms of sun protection in comparison to the general U.S. adult (18 and older) population (70%) [1]. The correlations performed in our study suggest that medical students who have been educated on the steps and procedures of a complete skin examination were more likely to use forms of protective sun equipment and believed their medical education had changed their belief of tan skin. Medical students who indicated they had been educated on how to counsel patients about risk factors and prevention were also more likely to seek shade when possible, avoid peak sun hours, and believe that their medical education has changed their beliefs about tanned skin. Our analyses suggest that medical school students have better sun protective practices because they are educated about skin cancer and potential risk factors. Thus, there could be a positive correlation between the amount an individual is educated about risk factors and prevention of skin cancer and the likelihood of engaging in safe skin practices. These findings should encourage primary care physicians as well as dermatologists to reach out to communities and offer education to the general public about skin cancer.

The lack of education amongst the adult population translates to the lack of parent sun-protection practices for children. Framingham, Massachusetts conducted a population–based study showing that 55% of children reported experiencing one or more sunburns during the prior summer and, more alarmingly, only 25% routinely used sunscreen [8]. There is a need to integrate sunscreen use into children’s daily routines to reduce their risk of developing skin cancer.

With the rates of skin cancer increasing it is also important to consider the economical impact. The annual cost of melanoma treatment has increased by 288% from 2002 to 2006 and from 2007 to 2011.6 This is high, especially when you compare it to treatment for all other cancers, which has only increased by 25% within the same timeframe. In the United States, skin cancer treatment costs $8.1 billion and of that $3.3 billion is from melanoma [9–13].

The level of skin cancer education in the general public is a problem that needs to be addressed. The Community Guide, which was made by The Community Preventive Services Task Force, states that there is enough evidence to recommend education approaches to increase the knowledge of preventative behaviors amongst child care centers, schools, and occupational settings. The Community Guide states that multicomponent interventions are the most effective when implementing preventative behaviors. The interventions must have two distinct components which can be any combination of the following: individual strategy, mass media campaign, or environmental and policy changes.[14,15] Using these guidelines to create a skin cancer campaign, education of the general population should increase and, in turn, raise their likelihood to engage in adequate sun safety techniques.

Our study compared medical students who are educated on safe sun practices and risk factors of skin cancer to students who are not yet educated on these topics. These results led us to believe that education makes a difference in a person’s likelihood to engage in safe sun practices. This could be the reason for such a gap in sun safety practices between the medical students we studied and the general population. In order to educate individuals of all socioeconomic statuses, the knowledge could potentially be transmitted as a public service campaign. As the general population becomes more aware about skin cancer risk factors and sun safety practices, the prevalence of this form of cancer should decrease.