Pearly penile papules are harmless dermatological condition characterized by small dome-shaped to filiform skin-colored papules located in one to several rows along the sulcus or corona of the glans penis. We describe six male patients with pearly penile papules whose diagnosis was assisted by means of videodermatoscopy. All lesions showed a characteristic whitish pink cobblestone appearance arranged in one or several rows. Each papule contained central dotted or comma-like vessels and was surrounded by crescent-shaped whitish structures. Videodermatoscopy may assist the diagnosis of pearly penile papules and successfully differentiate them from genital warts and molluscum contagiosum.

Pearly penile papules (PPP) are harmless dermatological condition that may cause considerable discomfort and anxiety to male subjects [1,2]. They represent as small dome-shaped to filiform skin-colored papules located in one to several rows along the sulcus or corona of the glans penis [2–6]. The condition has been firstly described by Littre and Morgagni in 1700 however the term “pearly penile papules” has been introduced by Johnson and Baxter in 1964 [7]. PPP are considered a normal variant that is observed more frequently in uncircumcised males. Their incidence ranges from 8 to 48 %. PPP are noted most commonly in the second or third decades of life and they gradually may become less noticeable with increased age as well as after circumcision [2,8]. Diagnosis is made clinically and may be confirmed by performing histopathological examination. The observed thin-walled ectatic vessels in the dermis in association with a fibroblastic proliferation indicate angiofibroma. PPP are asymptomatic and require no therapy. At the request of patient they can be removed with cryotherapy, surgical excision, electrosurgery and laser therapy (carbon dioxide laser, pulsed dye laser, and Er: YAG laser). Topical application of podophyllin has been ineffective for PPP [2,9,10].

Most patients with PPP seek dermatological consultation because they are in doubt of a sexually transmitted disease. PPP are not associated with sexual activity but they quite often may be combined with infectious diseases such us genital warts and molluscum contagiosum. In that case the correct diagnosis is very important. It could be assisted by means of non-invasive dermatoscopy.

In the following report six cases of PPP whose diagnosis was assisted by means of videodermatoscopy are described.

Six uncircumcised men aged 16-50 years self-referred him to our dermatology clinic because they were in doubt of a sexually transmitted disease. All patients were clinically diagnosed with PPP based on the observation of various numbers of small pearly dome-shaped papules about 1 mm in width and length, which were arranged in 1-3 rows along the corona of the glans penis (Fig. 1). The papules were asymptomatic and had been present for several years. They were combined with genital warts in 2 patients (Figs 1C and E), and balanitis in 3 patients.

Figure 1: Clinical findings in male subjects: A-D, F, G. Small whitish papules oriented in a few rows on the corona of the penis of all patients; A, B, G. Redness and erosions of the preputium and glans in patients 1, 2 and 6; H. Patient 6 (G) after treatment; C, E. Genital warts in patients 3 and 4

In the first two cases (Figs 1A and B) the irritation was related to physical trauma, whereas in the third case (Fig. 1G) painful redness and erosions of the foreskin and glans were developed after self-application of topical podophylotoxin 0.5% solution.

Videodermatoscopy examination was performed using digital videomicroscope (DinoLite, AnMo, Taiwan) with magnification of x60 and x160, without and with oil immersion, and polarized light. PPP showed a characteristic whitish pink cobblestone appearance arranged in one or several rows.

Each papule contained central dotted or comma-like vessels and was surrounded by crescent-shaped whitish structures (Figs 2A, B, C, F, and G). Balanitis was characterized by erythema and erosions (Fig. 2F). The dermoscopic findings of genital warts consisted of mosaic-like pattern with a white reticular network surrounding central dotted vessels (Fig. 2D). 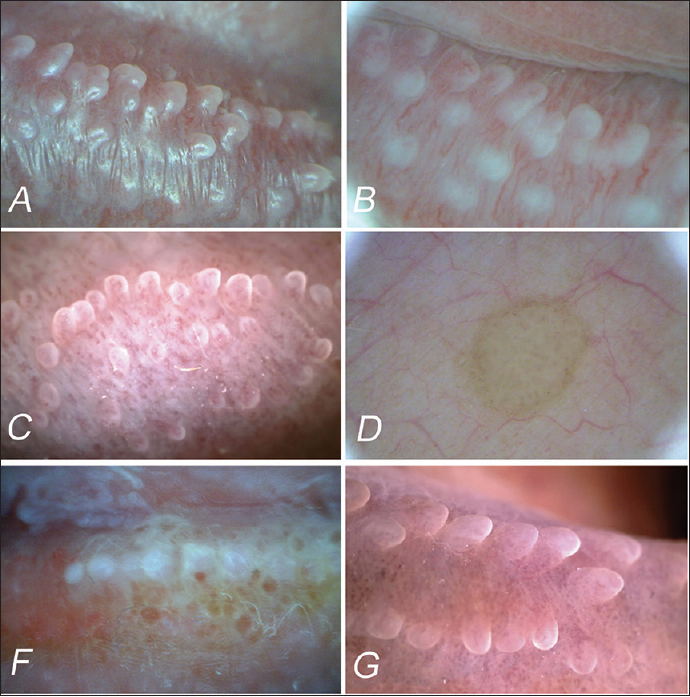 All patients were informed about the benign character of PPP and specific treatment was not applied. Balanitis was treated with appropriate topical medications, and genital warts were destroyed with cryosurgery.

Videodermatoscopy (VD) is a modern non-invasive technique that allows in vivo visualization of the superficial skin structures with magnification ranging from x20 to x1000. It greatly improves the diagnostic accuracy not only for pigmented skin lesions, but also for many non-pigmented skin disorders.

Recently, the usefulness of VD for diagnosis, differential diagnosis and monitoring of ectoparasitic, infectious and inflammatory skin diseases has been documented [11].

A few reports about dermatoscopic findings of PPP exist until now [7,12–14]. Dermoscopically PPP are characterized by whitish pink cobblestone or grape-like papules arranged in a few rows and surrounded by crescent-shaped whitish structures. Each papilla stands alone and shows central dotted, comma or hairpin-like vessels. The characteristic dermatoscopic findings may eliminate the necessity of biopsy and may help to differentiate PPP from other genital lesions such us genital warts and moluscum contagiosum [12–14].

Genital warts are papillomatous lesions in which multiple whitish projections with tapering ends arise from a common base (Fig. 3A). Dermatoscopic findings are described as “mosaic-like” pattern consisting of a white reticular network surrounding dilated vessels visible at higher magnification (Fig. 3B) [12–14]. 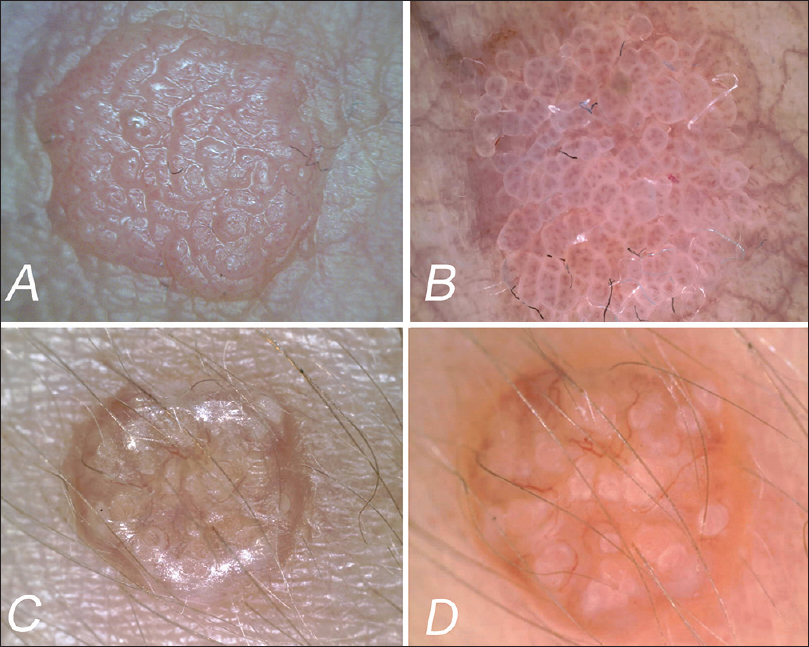 In this report we showed the characteristic dermatoscopic features that may assist the diagnosis of PPP and differentiate them from genital warts and molluscum contagiosum.

Recognition of these specific features would enhance the accuracy and timeliness of diagnosis, help the choice of most appropriate therapeutic approach, and reduce anxiety. We recommend use of VD for diagnosis of penile lesions in the daily dermatological practice.

The examination of the patients was conducted according to the Declaration of Helsinki principles.